Visual. That is pretty much what differentiates visual novels from the usual novels. Now some might argue that there are also background musics and voice-overs, but they tend to serve as secondary, with the latter being the latest addition to the group. While you can exclude the last two, you cannot dismiss the visuals without turning said visual novel into a sound novel for instance. After all, you cannot have "visual novel" when you take out the word "visual".

Being one of the words that form the very term, visuals play an important role to tell the story together with the writings. Where the writings failed to portray, the visuals filled in for it. Visuals consist of character sprites, backgrounds and also the cg scenes. To me, out of the three, cg scenes are what defines the visual.

Before some getting dismayed and voiced out that both character sprites and backgrounds are just what a visual novel needs and cg scenes are just the extra, keep in that this extra is what brings life to a rather static medium that is visual novel.

Cg scenes imprint a better memory for us regarding a visual novel. Whether it is a shot of eating ramen with a maiden during Christmas, or a girl with a winged backpack rubbing her nose with teary eyes, or even one with the student council taking a short nap in the classroom. Cg scenes allow us to recall favorite moment much easier than writings. It is refreshing to see what the cg scenes can do with the characters by creating dynamic poses and views. They help to erase the delusion of overall stiffness the character sprites tend to suggest.

When do we start using some cg scenes in our novels? Below are a few situations that benefit from having cg scenes. 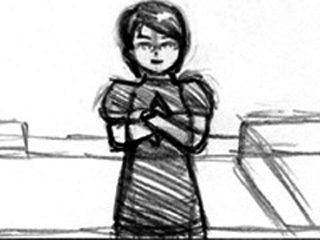 A character's introduction only happens once, so instead of just a passive standing sprite. 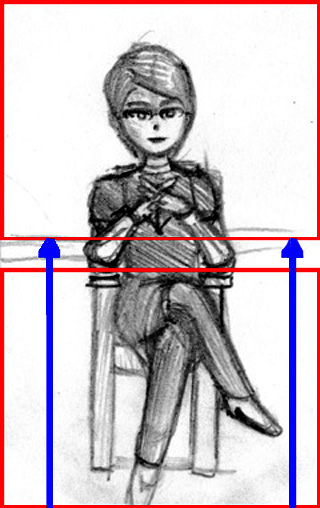 We can do with a cg scene, like a panning scene from bottom to up as shown on the left. 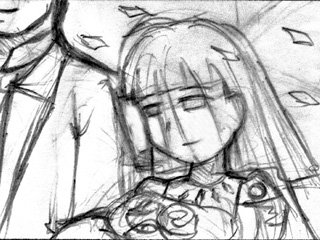 Not only that this serves as a treat to the readers for reading till the end, a cg scene at the end also serves as a sign of conclusion to the story.

Other actions not practical with sprites 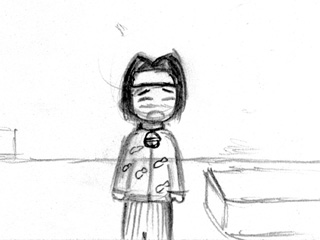 On the left is a girl that is struck with a fever, and the main character is spoon-feeding her. Now logically speaking, the character should be lying on the bed instead of standing straight, and in some other vns, they do not even show a standing sprite. 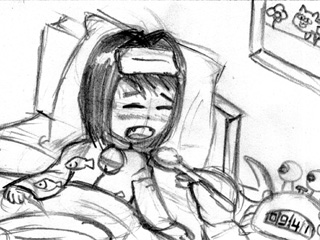 Do this as a solution. You might as well add more stuff to personalise the character.

This does not limit to a character on a bed. You can also use cg scenes to portray a character sitting on a chair if the situation calls for it. The choices are limitless.

Of course, sometimes you might be concerned whether the text box would cover up the extra details you put onscreen. But let's not forget - most vns nowadays allow you to hide the text box. If not, there is always an option for a gallery mode.

So why there seems to be a lack of cg scenes in EVNs in general? Beside from EVN community being young(Yes, it still is), one of the reasons I can assume is that there is yet a set price for working on these cg scenes. A piece of cg scene takes more time and effort to set up as well.

To put it short, cg scenes shouldn't be left out. Who knows, maybe your games need that little something to further enhance them?